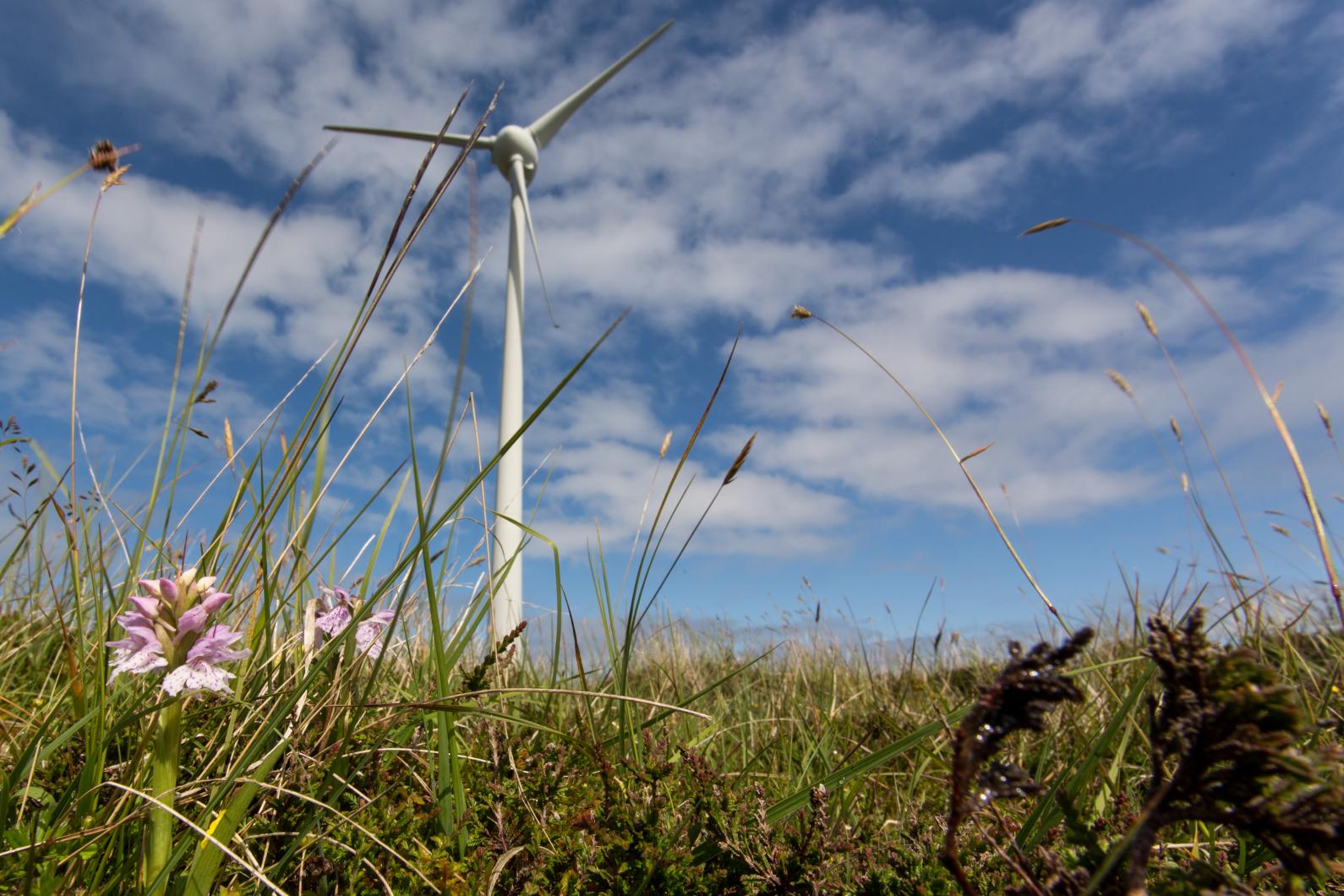 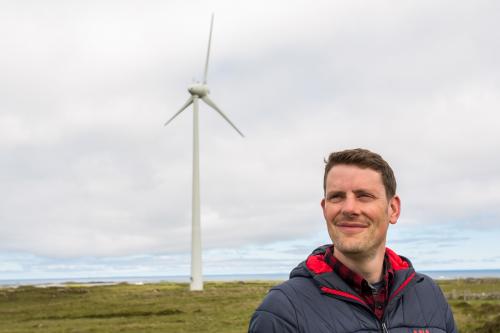 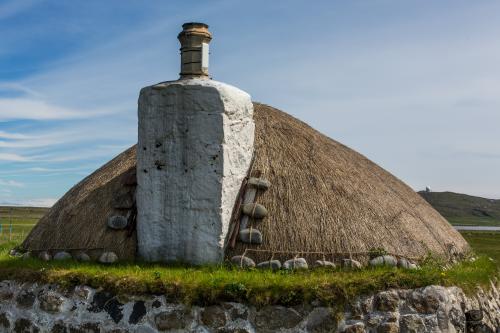 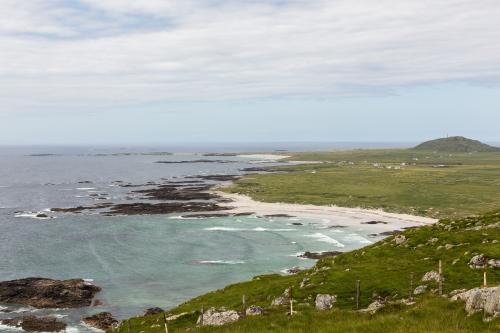 On the small Hebridean island of Tiree if the locals talk about the wind turbine at the north east end of the island they don’t call it a turbine but speak affectionately of Tilley and talk animatedly about how it has benefited their close knit community.

The name of their 75m tall wind turbine on the windswept island, west of Mull, was chosen by local schoolchildren who were doing a project on the Second World War and thought the light at the top of the tower looked like that on a tilley lamp.

As the 653 inhabitants can attest to, wind is something the island has in plentiful supply, so a turbine appeared to be a good way to create renewable energy and generate an income for the island.

In just one year Tilley provides enough clean electricity to power the equivalent of 3650 homes for a year. And since the turbines started turning five years ago, the profits from electricity generation - £100,000 per year - have been invested in the community.

Andy Wright who is governance and general manager for the Tiree Community Development Trust, responsible for the distribution of funds to deserving projects, says they are very proud of being able to generate energy in a sustainable, green way that also benefits the islanders.

Andy said: “There’s not a place you can go on the island without seeing something that has been directly or indirectly benefited from community turbine which is a testament to how the vision for renewables can filter down to all those on Tiree.”

The idea behind developing a wind turbine came after a development office from the Scottish government came to Tiree in 2003 with a brief to kick start new community projects and help set up a development trust with the mandate to take these forward.

Invitations to help develop the turbine project were made to islanders with specific skill sets, including a former investment banker, a person with project management experience and building contractor Bruce Kemp who went on to become chair of Tiree Renewable Energy Ltd, the company, set up in 2005, that has ownership of the turbine.

For Bruce it was a “no brainer” to get involved with a dynamic group of people.

He said: “One of the first things we did after feasibility studies had been carried out was to hold a public meeting where we presented the proposal to build a turbine to the island. This was followed by a postal ballot through which 86% of islanders voted in favour which gave us a clear mandate to take the project forward.”

This was during the infancy of community renewables expansion in the UK but organisations such as Community Energy Scotland were able to offer support and advice.

It wasn’t until March 2010 that, to great fanfare, Tilley the turbine was finally commissioned at a cost of £2.2m - double the estimated budget had the site been based on the mainland. The logistics of building a turbine on an island such as Tiree requires a ferry that carries passengers between the Islands and Peninsulas on the West Coast of Scotland to be chartered to transport the pieces that would become Tilley. The island’s single track roads were widened to transport Tilley from the ferry port to the site of the turbine. Around £400,000 had to be invested to upgrade the grid system so it had the capacity to regulate the current generated by Tilley.

But the fact that the project was eligible for the government’s recently announced Feed-In Tariff dramatically change the business plan. Bruce and the team had predicted that in year one they would make £5,000 profit but the additional subsidies took that up to £50,000 for the first year of operations.

All profits were to be donated back to the development trust to fund local projects and the upkeep of community buildings and a shop. A youth worker was employed to organise activities, sports clubs and invite people from the mainland to teach art classes.

Andy said: “This has meant that youngsters can get out and socialise more and it also has a massive impact on the lives of people who could become isolated, such as the elderly. We also employ an outreach worker and minibus service to take elderly islanders to a lunch club twice a week, to the shops, doctor’s appointments, exercise classes and the bingo on a Friday, A ranger service provides a valuable interface between visitors and locals, makes island more friendly and welcoming.”

Tiree Maritime Trust, set up to promote the maritime heritage of the island, is one such group to have benefitted from Tilley. They were given a grant of £38,000 to build a new boathouse for the group in 2013 and a further amount to fund a community sailing programme and purchase six boats.

Volunteer director Jo Vale: “The great thing about Tilley is that it gives you funds that then help you to access more funds, We are getting people of all ages who maybe have never sailed before coming along and getting involved in sailing.”

Grants are also used as seed corn funding and encouraging people to go out and find what other funding streams are available. The trust believe that by giving a group ten per cent of what their funds it gives them a much stronger case for them to be able to secure other grants. The trusts intervention rate for projects is 25%, having given away £0.5m which has unlocked further funding of £1.5m . Andy added: “There is a confidence that when it comes to tackling community issues we now have both the resources and a belief to tackle problems. By going through the process of delivering such a big project has given people the confidence to deliver other projects that can contribute towards stabilising the population.”

Whilst the donated profits have been used to help the community there is also a deeper message being told about carbon emissions and the need to mitigate and adapt to a changing climate. Information on output figures are published and related back to household usage and the island has a household retrofit scheme. Groups of schoolchildren visit Tilley and are taught about the environmental benefits of generating renewable energy. . There were plans to put a second turbine in but the reduction in Feed-in Tariffs has made it less economically viable. The development of a local grid system would mean the electricity could be supplied directly to the local community, reducing energy bills in household reliant on costly fossil fuels to heat their houses. There are also high levels of fuel poverty on the island, which has a low wage economy and houses that are old, damp, draughty, not well insulated. An application for a funding to carry out a feasibility study is underway.

Whatever the next stage of the island’s energy journey, Tilley has made a big impact on a small island.

If you feel this content is inappropriate or want to report a technical issue - do so here.